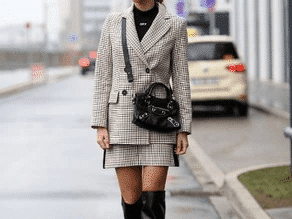 November 14, 2020November 22, 2020 by admin
Todays busy Lifestyle the Balenciaga  best recognised for its line of motorcycle-inspired handbags,  especially the “Lariat” what a wonderful piece of fashion for the busy woman.
If the word Lariat doesn’t ring any bells automatically, that may be that this ‘It’ bag has gained two other names over the years: the Community and the Motorcycle—and all are revealing.
In 1997, the designer Nicholas Ghuesquiere was named creative director of Balenciaga, a position he inherited after the tenure of the Dutch couturier Josephus Thimister.
While the iconic house built by Cristobal Balenciaga remained in existence, it  had not yet experienced the same immense popularity it had once enjoyed. Guesquiere ‘s minimalist debut for Spring / Summer 1998 was a split that would launch a praised 15-ear tenure as the company’s fashion boss.

Is the iconic Balenciaga Motorcycle “City” bag making a resurgence again? I would say yes and recommend you take a second look and see how you can work it into your busy lifestyle.

The latter style (designed in 2000 by Nicolas Ghesquière) hung on the wrist of every It-girl from Paris Hilton to Lauren Conrad in the early and mid-2000s.

Flash-forward to 2016 and the silhouette began resurfacing when Mary-Kate Olsen stepped out with it. Now it’s reclaiming its place as a certified must-have thanks to its inherently cool slouchy silhouette.

“This bag has been around for 18 years; it became a classic and then somewhat plateaued,” Gorra explains. “But since the graffiti print launched a few seasons ago, clients have been clamouring for it again.” That’s right: The City bag is now proving to be a best seller in 2019.

Original article on “who what wear”. The Bag It Girls Carried 10 Years Ago Is in High-Demand Again

Balenciaga (/bəˌlɛnsiˈɑːɡə/ bə-LEN-see-AH-gə,[1] Spanish: [balenˈθjaɣa]) is a luxury fashion house founded in 1917 by Spanish designer Cristóbal Balenciaga in San Sebastian
Today, the company is best recognised for its line of motorcycle-inspired handbags, especially the “Lariat”. One Balenciaga shop is situated in New York City, New York, 22nd St. The second shop is situated on
Melrose Avenue in Los Angeles, California. A third shop newly launched in South Coast Plaza, Costa Mesa, California.  The shop is 1,200 square feet (110 m2) and has coffin-like inset exhibits.
The New York and Los Angeles boutiques are both men’s and women
‘s ready-to-wear, while the South Coast Plaza store is wearing only women’s clothes.
The fourth one, found in Las Vegas inside Caesars Palace, holds only accessories. An alternate location on the Las Vegas Strip, in Crystals
at CityCenter, offers shoes and women’s ready-to-wear accessories.
The store at the Ala Moana Center in Honolulu sells ready-to-wear and accessories for men and women. There’s a shop in the Bal
Harbor store in Bal Harbor, Florida. The 8th shop will launch in the spring of 2014 in Dallas, [Texa, Highland Park Village, to become the first boutique in Texas.
The Highland Park Village Boutique is launching next to Christian
Dior, bringing ready-to-wear menand women and accessories.
All the boutiques have a spirited architecture, white panelling, marble and glasswork, as well as black leather seats and
light green, black and navy carpets or white tiles, reflecting the brand’s leaning towards avant-garde and the drama of luxury.

2021 Social Selling On LinkedIn – My Tips